return to Texas Vet Board Watch


August 3, 2008 Ms. Nancy S. Fuller Chair, Opinion Committee Office of the Attorney General P.O. Box 12548 Austin, Texas 78711-2548 Re: RQ-0726-GA Dear Ms. Fuller, Thank you very much for your letter, dated July 28, 2008, concerning the request your office received for an attorney general opinion from Mr. Dewey E. Helmcamp III, J.D., Executive Director of the Texas Board of Veterinary Medical Examiners (the Board). As mentioned in your letter, Mr. Helmcamp's request was dated July 11, 2008, and your office designated it as Request No. 0726-GA. This matter is of great interest to me and I certainly appreciate the opportunity to be able to provide your office with my comments. This matter is also of extreme importance to the citizens of Texas as it directly relates to the Board's unfair and biased complaint process. Background: I, along with my wife, Cindy, filed a complaint with the Board, in January 2006, alleging veterinary malpractice in the death of our beloved 8 year old AKC champion-sired male Shih Tzu, Stempy, at the hands of a Mesquite veterinarian, who is a licensee of the Board. The Board subsequently dismissed our complaint. (All details of our complaint can be found online at Stempy's website:  www.stempy.net ). We are in strong disagreement with the Board's decision and I am convinced that the dismissal is a direct result of the Board's extremely biased and unfair complaint process. For a quick overview of just how unfair and biased the Board's complaint process is, all in favor of the licensee, please see the chart I have created below: 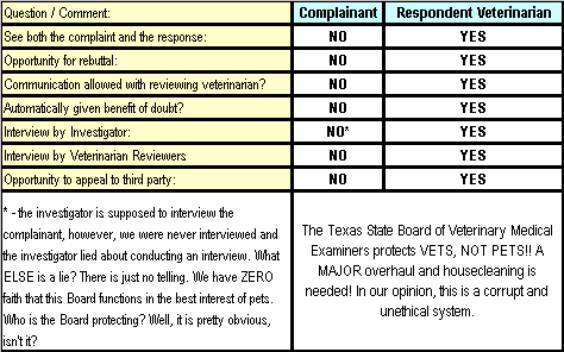 The animals and citizens of this great state deserve better. We shall continue on – in Stempy's name – in our fight  to bring about change to this corrupt complaint process.

Conclusion:
I am aware that the role of the Office of the Attorney General is to interpret the law, rather than to make the law, and that some changes may need to be accomplished through legislative action. However, I do hope that your office will rule appropriately on the fallacy of the Board's current interpretation of the law.

Thank you very much for your time and consideration.

Thank you for the opportunity to provide additional information in regards to Request No. 0726-GA. I trust the Opinion Committee has already received  my previously submitted comments.

First, I would like to clarify an extremely important point. It is my belief that Mr. Dewey Helmcamp has not properly represented in his request for your Opinion exactly who was seeking access to the complaint. The three interested parties that you have solicited comments from are former complainants, including myself. The request for access is NOT being made by the general public.

Perhaps Mr. Helmcamp is confused a bit because since the time our complaint was dismissed, I have also become an active citizen advocate. In that capacity, I have made several requests for public information from the Board. Some requests are nonspecific to our complaint and could be considered as a general public request. These requests are entirely separate from any requests made as the complainant.

It would also appear that an incorrect picture has been painted of the complaint process. Let me be very clear. To be sure, an overwhelming number of complaints are dismissed without the complainant ever having the opportunity to see or respond to the tailored reply submitted by the licensee – who themselves had the FULL benefit of being able to craft their reply to everything submitted by the complainant.  As mentioned in my previously submitted comments, this is extremely unfair and outrageous.

VERY, very few complaints ever reach an informal conference, where the complainant MIGHT get to see a radiograph that they had already paid for. The complainant is still not given the opportunity to see or respond to the licensee's response even at the conference level.

To illustrate just how out of balance the Board's complaint process is, I made a request for public information from the Board that I received today, August 22, 2008. Numbers do not lie and I believe this chart that I put together speaks for itself: 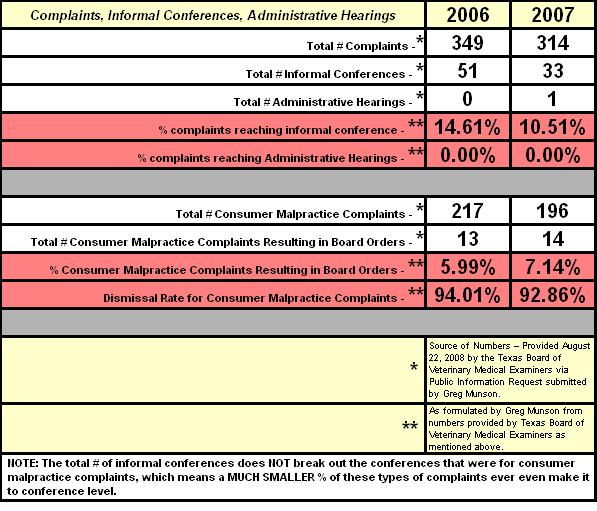 As Mr. Helmcamp himself notes, the complainant is only allowed full access (or more correctly stated...ANY access) to the investigative file once a complaint reaches the level of administrative hearing. In the last two years, as clearly illustrated above, that percentage is currently 0.00%. Wow.

I am moved to disclose to you, General Abbott,  further outrageous, unethical, and, I believe, unlawful conduct by a state employee / board investigator involved in our complaint.. Board rules in effect at the time of our complaint stated that the investigator shall interview the complainant (emphasis added). The investigator assigned to our complaint never interviewed us. The investigator claims to have called and interviewed my wife. We could understand the investigator being mistaken, but this investigator went so far as to even fabricate a conversation, which elevates his actions from mistaken to intentional. The day in question, my wife was not at home. She was at work and we have the timecard to prove that fact. We also obtained our phone records from our phone company which indisputably proved that no phone call or interview took place. At that point in time, my wife had never spoken to ANYONE associated with the Board. Period. The Board has refused to take action.  If I am not mistaken, I believe it is against the law to falsify a government document. We presented all information to the Travis County District Attorney, who chose not to pursue the case for reasons unknown.

Attached you will find email correspondence between myself and certain Board employees that took place between the time of the original dismissal of our complaint and the subsequent dismissal of the appeal. I believe this email correspondence gives keen insight into the atmosphere and obstacles facing complainants. It also details our information request as the complainant, which the Board never asked for an open records ruling on, and contains the Board's statement of when the investigator claims to have interviewed my wife. Please be sure to read through that information as well.

Again, I am appreciative of the opportunity to be able to provide my comments, which includes our up close and personal experience with the process. If there are any clarifications needed or if you have any questions, please feel free to contact me. Thank you very much.

return to Texas Vet Board Watch